Each year MAI SN funds fundamental works on aging, typically PhD. Usually, MAI SN founds about two Ph.D. a year. Co-funding with other institutions, especially MAI members is warmly welcome and would be favoured in the ranking.

– Short presentation of the people involved in the proposal

The production by additive manufacturing of powder bed selective laser melting (SLM) and arc-wire (WAAM) of parts made of austenitic alloys (stainless steels and nickel base alloys) presents difficulties in terms of processes, effective properties and their qualification, which are described hereafter.

Indeed, it is found that the final mechanical properties are on the one hand different from traditional counterparts and on the other hand anisotropic. The amplitude of these differences and this anisotropy can be considerable, thus calling into question the fitness for use as well as the design of the part itself based on codes which do not manage these particularities (e.g. RCC-M).

The origin of these properties is the particular and textured microstructure obtained on part, itself inherited from the specificities of the processes. Mastering the entire chain from the process, the finishing touches, to the qualification or even the codification of such parts, requires causal links between the process parameters, the microstructure and the mechanical properties (including the mechanical constitutive laws and material fracture while considering anisotropy). As final users MAI members need this mastering to secure the fitness for use.

So, MAI SN wishes to provide the corresponding knowledge. The following paragraphs summarize the microstructural particularities and that affecting the mechanical properties. Finally the scientific challenge that this call calls has to solve is explained.

2       Specificity of these products

The specifics compared to traditional manufacturing are described briefly, with a few reference which do not constitute an exhaustive state of the art but just a desire to illustrate the point.

The SLM process implements solidification under conditions of extreme temperature gradients and speed of solidification, which are common to laser welding. Successive juxtaposed refusals also lead to severe work hardening in a wide temperature range.

The WAAM process differs from the corresponding welding by the search for high deposition rates and a difficulty in controlling thermal conditions due to the high arc time.

The problem mainly affects austenitics (steels and nickel base) and aluminium alloys, that is to say alloys that do not exhibit massive solid phase transformation during cooling. The transformation during continuous cooling of austenite allows low and high alloy steels to regenerate the structure either directly or during reaffectation and thus erase much of the previous metallurgical history.

This is obviously not the case with austenitics widely used in our installations and which therefore constitute a particularly complex case requiring the studies mentioned. For practical reasons and industrial interest the material selected to study this issue is 316L (Z 2 CND 17-12) steel, without excluding some work on nickel alloys which will have similar behaviours.

Grain orientation. Very dependent on the deposition conditions, more or less marked orientations of the grains are possible. Most often they are in the cross direction therefore the opposite of the wrought. 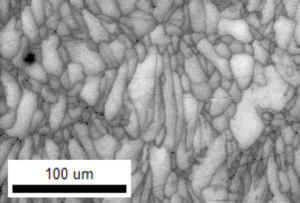 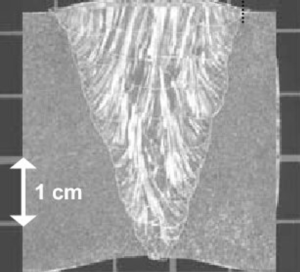 Crystal texture. Solidification in a strong temperature gradient leads to a marked crystalline texture but which can be modified to a large extent by the lasing or deposition strategy (example Figure 3).

Dislocation cells. The work hardening is sudden at variable and cyclic temperatures which can cause a dynamic restoration and lead to quite marked dislocation cells (example Figure 5). Note: the question of recrystallization is not very clear.

In conclusion, the microstructure is very multi-scale without it being always possible to do without one of these scales in its description.

In the as build state, that is to say before any heat treatment, it is found differences in properties compared to the traditional material and a strong to very strong anisotropy (some examples for SLM are given Table 1).

In general, but in variable proportion, the elastic limit, the tensile strength and the hardness are higher while the elongation at break, the impact toughness and the Young’s modulus are lower. The origin for the former is attributed to both the work hardening and the “synergy” between the different scales (a kind of Hall-Petch effect). The latter might be attributed to texture effect but it remains to be investigated and demonstrated.

The atypical side of microstructures and static mechanical properties also raises the question of dynamic properties (fatigue, creep), and failure beyond the potential low values of impact toughness. Indeed, the modes of damage on the one hand and the developing of the plastic zones on the other hand are likely to be modified compared to conventionally manufactured 316L.

The non-conventional mechanical behaviour with strong anisotropy result from the microstructural specificities (crystal texture, anisotropic grains, dislocations network and solidification cells) which are in turn function of the manufacturing process.

So the responsibilities of the industrial actors are quite well defined: on the one hand the manufacturer has to provide high quality and reproducible material and parts, and on the other hand the designer and end-user like MAI members have to design their parts with realistic and optimised properties to match their specific use conditions.

As a consequence, the link between microstructure and the mechanical properties and the corresponding modelling has to be established to take fully advantage of additive manufacturing of austenitic alloys. A brief literature survey shows that it has hardly been finalized: part of the link have been established whereas a global one is lacking.

The material selected to study this issue is 316L (Z 2 CND 17-12) steel, MAI SN will not consider proposals with other materials.

The ultimate objective of the work is to pave the way for introducing such SLM or WAAM manufactured alloys in design codes and industrial practice of MAI members.

Wear is an acting degradation mechanism in nuclear power plant. MAI has long demonstrated it. Field examinations were published in [1] showing wear of the stainless steel clad of control rods, wear of stellite deposited on the surface of the latch arms of control rod drive mechanisms, wear of guide tubes, wear of alignment pins on the core support plate. More recently Westinghouse reported wear of thermal sleeves in EDF plants to the NRC [2].

For utilities, the key question related to maintenance is the kinetics of wear. A precise knowledge of wear kinetics would allow to plan replacement and to demonstrate safety margins which are especially important when dealing with the control rod cluster assembly.

A robust kinetics presupposes understanding of the wear mechanisms as well as the mechanical solicitations during the contact. MAI SN is interested into the mechanisms and would like to support some fundamental work dedicated to understand them.

In most of the cases, the component is moved by thermal hydraulics fluxes. Contact can generally be described as impact sliding. One of the key generic feature of the observed wear in NPP, is that it occurs in aqueous corrosive environment. The role of corrosion in the wear mechanisms has been highlighted for several components such as the gripper latch arms [3] and the control rod guide assemblies [4]. However, few studies have been interested in the interactions between mechanical and chemical (corrosive) effects in the wear mechanisms, for example by instrumenting laboratory wear benches with electrochemical probes to follow the in-situ corrosion rate. Quantitative data about corrosion during wear are of fundamental interest in order to be able to develop reliable predictive wear models for the components.

Proposal could be related to the study of this interaction between corrosion and wear. We would welcome theoretical as well as experimental works. Of course works in primary water would be favored but the call is not limited to this environment.

The second scientific topic of interest is related to the presence of a friction layer (also called “third-body”) on the worn surfaces of some components. For example, this type of layer has been highlighted at the surface of guide cards worn in reactors and on laboratory benches, and it has been found that its properties (composition, morphology…) are very different from the native oxide layer [42]. This friction layer plays a role in the wear mechanism, for instance by modifying the friction properties as well as the plastic yielding [5] and the corrosion rate of the underlying metal.

Proposal could be related to study of the role of the friction film in the wear mechanism. We would welcome theoretical as well as experimental work. Even if the study of the wear of stainless steels in primary water would be favored, the call is not limited to these materials and this environment.

Discover the Handbook of material ageing management for nuclear reactors

DISCOVER & BUY
Our website uses different types of cookie, to ensure you get the best user experience on it. You can accept it, refuse it, or read more about our policy. AcceptRefuseRead more about Cookies